1. Engagement ceremony: This ceremony is the first ceremony of Marwadi wedding rituals which generally placed at bride’s home. In this ceremony the parents of bride and groom applies tilak on their forehead and present them gift such as sword, fruits, clothes, sweets and some more gifts.

2. Griha shanti and Ganapati sthapna ceremony: This ceremony takes place before 2 days of wedding ceremony. In which Marwadies locates the Lord Ganesha to bless all the ceremonies of wedding as well as bride and groom.

3. Mehfils and Pithi dastoor: In this ritual the paste of sandalwood and turmeric is applied on the body of bride & groom. After this ceremony , the bride & groom cannot move out from the house till the wedding day. Then Mehfils are arranged separately for male and female in which they perform their traditional folk dance known as ‘ghoomar’.

4. Mahira Dastoor: This ceremony has its due share of being an expensive affair !!! In this ritual, bride and groom’s maternal uncles presents gifts as well as cash to all family members and relatives. 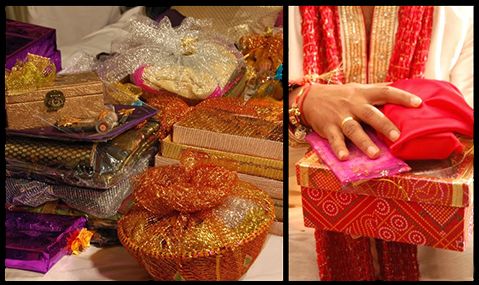 5. Palla Dastoor and Janev: In ‘Palla Dastoor’  the relatives of the Bride present some jewelry and clothes to the bride to wear in wedding ceremony. On other hand in ‘Janev’ ritual, the groom is dressed in saffron clothes and performs a hawan. After the hawan ceremony, he wears the sacred thread called janev.

6. Nikasi- In this ritual, the groom wears a sehra (head gear) on his head , which is done by his brother-in-law. After this , the groom’s sister applies kajal in his eyes and his sister ties golden threads on the wedding mare. The groom family is all set to take the baraat procession to the bride’s residence!

1. Rajput baraat: In this ceremony the groom Is dressed up in typical traditional attire and rides on a horse or elephant by holding the sword in hand. The baraat looks like traditional walk of king. 2. Traditional Aarti: Once the groom along with the baraat arrive at the brides residence, he is welcomed by the mother-in-law by a traditional aarti.

3. Jaimala : After the warm welcome, the groom is taken to a dias, the bride arrives with her face covered with a long veil and the jaimala takes place, usually the first step in the wedding ceremony.  Then they proceed to the Mandap where wedding rituals takes place.

4. Granthi Bandan: In this ceremony the groom’s sister or the priest ties the bride’s chunni to the groom’s scarf, signifying the eternal knot and union of them both.

5. Panigrahan : A simple yet beautiful ceremony, in this the groom takes bride’s hand in his hand and they promise to be together through thick and thin, in good times and bad.

6. Pheras: In this ceremony, the bride and groom take pheras  ( circle) around the sacred fire flames and the priest chants mantras and holy scriptures. In marwadi wedding  four pheras are done in mandap and three later at the entrance. As per tradition, in two pheras girl is in front and in two she is in the back.

7. Ashwahrohan: In this ritual the bride puts her feet on the grinding stone, a symbol of steadfastness. After that the bride’s brother puts puffed rice(kheel) in bride’s hand which she transfers to the groom and are then offered to the fire. he ceremony proceeds towards sindoordaan and Vamang sthapana.

1. Bidai and other rituals: When wedding rituals ends bidai ceremony starts in which bride departed for in-laws house. After arriving at home Grihapravesh, Pagelagni and Mooh dikhai takes places in which all relatives presents gifts to bride and blesses both bridegroom.

Marwadi weddings are religious and charming and follow each and every ritual whole heartedly.