Following the principle of simple living, the Tamilians do not like much pomp and show during their wedding ceremonies. However, this community is extremely particular about performing the various rituals and ceremonies in the most traditional and pious manner. The wedding ceremony is often attended by even the most distant relatives as it is believed to be a religious and sacred function.

Following are the brief details of the most important rituals and ceremonies that are integral to a Tamil wedding ceremony.

1. Panda Kaal Muhurtham: This ritual, held one day prior to the wedding, marks the beginning of the marriage function and requires the families of the bride and the groom to pray for a peaceful, happy and uninterrupted ceremony. 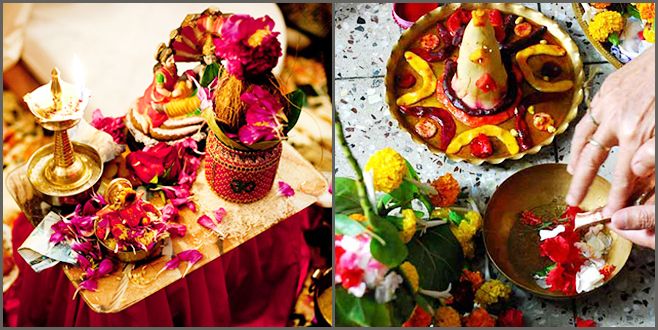 2. Sumangali Prarthanai: This ritual is celebrated to seek the blessings of sumangli women (women who die before their husband) for the bride so that she can also become a sumangli. 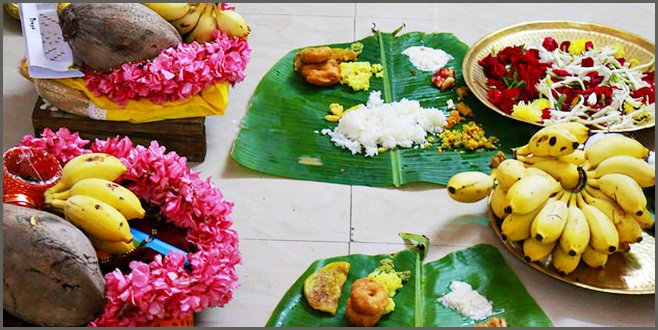 3. Pallikal Thellichal: In this ceremony, seven earthen pots filled with nine types of grains and curd, and decorated with sandalwood are immersed in water to seek the blessings of fish for the couple. 4. Nicchyatharatham: During this ritual the bride’s family offers prayers to Lord Ganesha. Later the groom’s family gifts a new saree, jewelry and other items to the bride and also apply a tilak of kumkum and chandan on her forehead. The bride and the groom also exchange rings in front of the assembled guests. 1. Mangala Snaanam: On the dawn of the wedding day, haldi, kumkum and oil are applied to the bride and the groom after which, they take a purifying bath and get ready for the wedding. 2. Kashi Yatra:  In this ritual the groom pretends to prefer to go for the holy Kashiyatra than marrying the bride. As he prepares for the journey with a walking stick and a few bare essentials, the bride’s father persuades him to change his mind by offering his daughter’s hand in marriage. 3. Pada Puja: This ritual requires the bride’s mother to wash the groom’s feet with kumkum, chandan and water. After this the bride is brought into the mandap by her family members. 4. Maalai Maatral: The bride and the groom exchange garlands of flowers three time to commence their holy matrimony. 5. Oonial Ritual: The bride and groom are made to sit on a swing and eat a banana and some milk while rice balls are thrown on them to keep the evil away. 6. Kanyadaanam: The bride’s father gives away his daughter’s hand to the groom for eternity while the groom promises to always take care of her. 7. Muhurtham: This ritual involves the application of kumkum in the bride’s hair parting by the groom. Later, the groom also puts a mangalsutra and a sacred thread around the bride’s neck. The groom ties this thread with three knots to symbolize the union of the body, mind and soul. 8. Saptapadi: This is the last wedding ritual in which the groom holds the bride’s left hand in his right one and takes the seven circles around the holy fire. After every round the bride touches her feet on the grinding stone to make the bond of marriage stronger. 1. Sammandhi Mariyathai: After the wedding ceremony, both families give gifts to each other as a token of love and appreciation. After this the bride leaves her parental home to go to her in-laws place with a lot of mixed feelings and emotions. 2. Grihapravesham: On reaching her husband’s home, the bride receives a warm welcome as her mother-in-law performs a small Aarti at the doorstep. 3. Valeyadal: The groom’s real sister gives various gifts to the new bride after which the couple is made to play various wedding games.